For 14 years I have been eagerly awaiting the arrival of a Master of wine to grace Dubai with his knowledge. Coincidentally, that day perfectly coincided with my first article for our newly born Wine Blog.
From the initial phone call from MMI, to the direct message to reserve my hotly anticipated interview shot, I delight in being able to report from my time with him.
The master, Demetri Walters, is a humble professional that works as wine educator and presenter for the iconic Berry Bros & Rudd, one of Britain’s oldest wine and spirit merchants. The iconic company first opened its doors back in 1698 at 3 St. James’s Street, London, where it still maintains its oldest residence.

Naturally we began the way all great interviews begin, by tasting of some of BB&R wines from around the world.
The line up was a mixture of new world and old world classic appellations.
BBR buys wine from producers and sell them under with his own label.
BBR sells wines to supermarket such Marks & Spencer and Waitrose, within their wine-shops, to private clients, to private clubs, Livery Companies, to restaurants, to airline companies, and they invented the first wine merchant website back in 1994, when was not really yet the era of the Internet as we know it today.

After this beautiful educational tasting, I nervously catch Demetri’s attention, with an unspoken hint that I was ready for our interview. Although prepared, the feeling of student interviewing the master refused to leave me. Yet I need not have worried. I didn’t even use my readily prepared notes after the first 2 questions, instead I found myself enthralled in engaging and passionate conversation, as if talking to a long lost friend at an all too familiar bar. This is one of the most beautiful things I love in the wine word- mutual passion for our craft.

Below are my favorite moments from my conversation with Demetri Walters:

LG: What do you have to say regarding New Trends in the market?
DW: The trend currently focuses on natural wines, not in the literal sense but more that we are leaning towards more sustainable wines, wines that are organic, biodynamic and also natural, as with no sulfur dioxide added. This is the trend at the elite end of the market, because as dietary awareness has improved in West Europe, wines are now following suit. People want wine with only a few additives and made more sustainably in the vineyards.
It has been proven beyond all doubts that pesticides and herbicides used in vineyards to combat fungicide have a residual effect on our body and its not good news. There are plenty of impending studies regarding those effects with some suggestions that a number of allergies are results of gradual poisoning of food processing. At the medium and lower tiers of the market artisanal wines are increasing in popularity, perhaps with slightly larger production than usual. We are now seeing artisanal producers from lesser-known wine regions such as Crete in Greece and Cyprus. Supermarket chains obviously are becoming more aware of those ancient regions that once were in obscurity and are now re-emerging.
To help increase popularity of these wines there are also a great number of hipster restaurants that are keen on micro producing such varieties, making wines from indigenous grape. This scenario is very exiting because this is a return to what the wine business was all about 300-500 years ago. 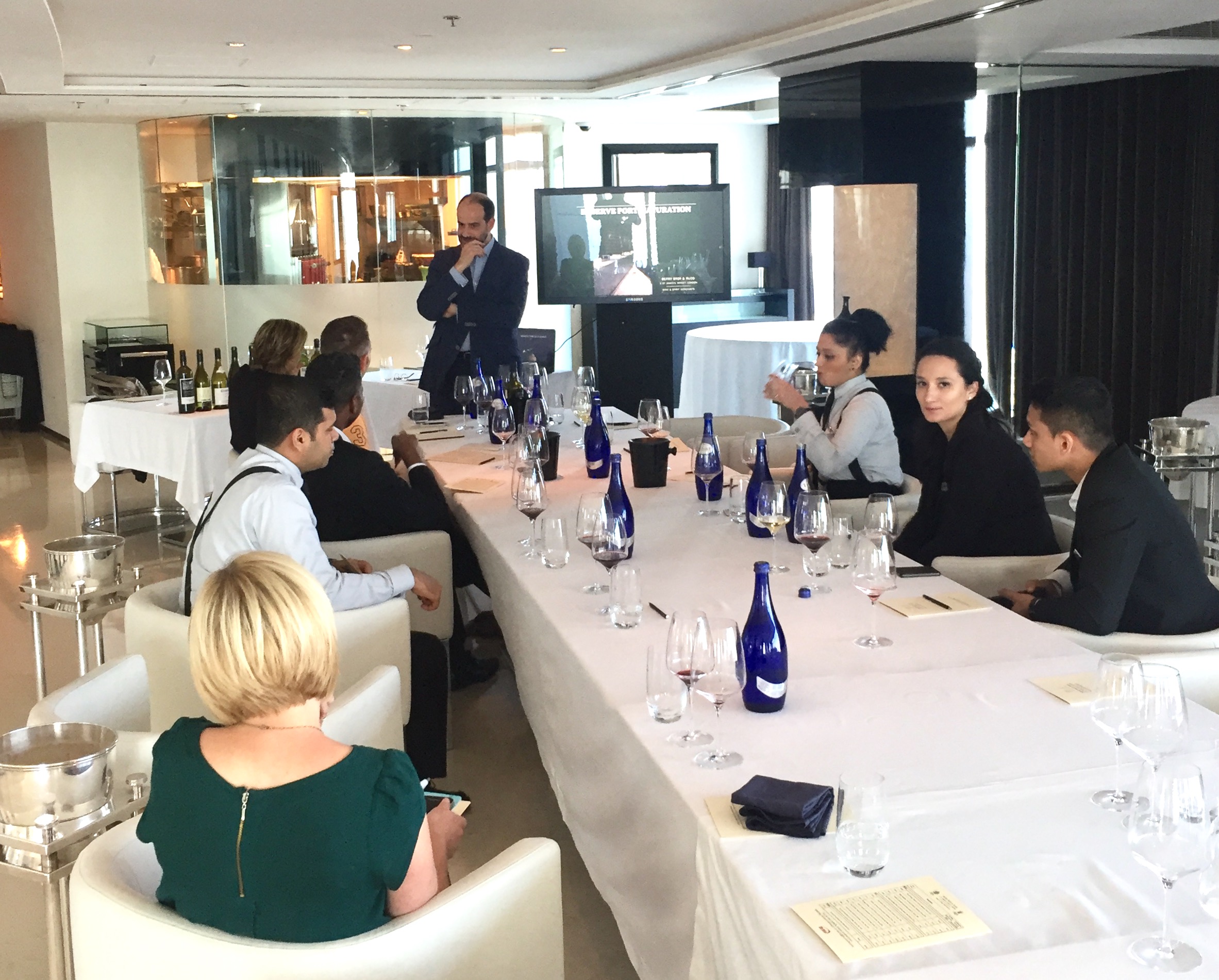 LG: Regarding new trendy grape variety?
DW: Indigenous grape varieties are definitely in the spotlight. Spain has great interesting grapes that we never heard about previous, but it’s not just the grapes that are important for the consumers, but also a combination of the quality and the sense of the place of origin.
For many years international grape varieties such as Cabernet, Merlot, Sauvignon and Chardonnay, have filled the new world as they have not indigenous grape varieties. Many people became very obsessed with these grapes so much so that many indigenous grape varieties and wine styles have been nearly forgotten. Grapes of a spectacular variety such as Galioppo of Ciro in Calabria, Aglianico of Taurasi in Campania, and plenty more from Greece and the east Europe region are demonstrating a renewed beauty due to the improving of wine making techniques.
The recently indigenous grape varieties that as we speak are hitting the markets are the grapes of the blend of Valpolicella. Others that are increasing in popularity are the Piedmont grape such as Barbera, Nebbiolo and Dolcetto. On the white front, Cataratto from Sicily, Greco di Tufo and Fiano di Avellino are doing very well. However the Riesling is the white grape to watch, together with the top end cru Beaujolais, which are both doing outstandingly well.

LG: Regarding Orange-Biodynamic & Natural, where are we?
DW: We are in a very fragmented concept here, the current thinking of natural wine is one I don’t agree with. What many people mean when they discuss natural wine, is a wine made with no added sulfur dioxide such as Lucas & Andre Rieffel from Alsace who produce an incredible Pinot Noir, and Stellar Winery in South Africa, the producers of some amazing generic quality wines without adding the sulfur dioxide.
However to me, natural means little intervention in the vineyards and in the winery. Something super organic and biodynamic, which are both qualities of natural wines. For example in Montalcino there are producers that are certified biodynamic but their principles are organic, and I would say that they are natural. When someone uses fungi in the vineyard to kill other fungus s such as powdery mildew, this is the best natural approach.

I don’t think that the biodynamic wine movement and the natural wine movements are doing themselves a favor being prescriptive about what it means to be one or the other, for me it is all about using your intelligence to work with nature.
Orange wine is a white wine made with an extended skin contact that gives a lovely texture to the body and also an extreme oxidation that flattens the fruit, and gets an orange color. Without the adding of sulfur dioxide the color cannot be reversed, and this is the typical wine that was produced 400 years ago. Not all the orange wines are orange in color and not all the orange wines are great.

LUCA: is the increasing in alcohol level connecting to climate change?
DW: In the old world, particular in Bordeaux, a winemaker operates different grape selections, so there are more unripe elements in the wine.
In vintages in the past, some were very warm and some pretty cool, we had pretty good run of vintages in the past 20 years and this is mainly due to lucky weather conditions.
Most importantly, Viticulture has greatly improved, grape selection and grape sorting are better, the introduction of second labels, better understanding of water stress; all these things have contributed towards ripe berries and much better fruit quality. But this doesn’t mean that the wine would automatically increases their alcohol level.
In Napa in the last 40 years, alcohol has increased nearly 2 degrees, that’s not only climate change but winemaker’s choice, because the domestic market likes wines like that. We in Europe tend not to like that, which is why I think the best wines aren’t made that way and that’s why I think that Ridge Montebello, a producer in Santa Cruz, is above any wine that is produced in Napa Valley.

LG: Any type of rosé you like?
DW: I like rose as it comes from what is typical of the region. Rosé from much of Spain is from thick skin grapes that produce lots of color but they can still be quite delicate. One of my favorite is Zambartas from Cyprus and it’s almost a red wine and it’s delicious, quite tannic, made from a Greek grape variety called Lefkada that is a big, robust grape.
I like the rose to be savory and I’m not keen on bubblicious rosés (what I call them when they are confected). That has nothing to do with the color itself, but with the winemaker fermenting at too cold a temperature and using yeast that intentionally adds banana, coconut and other alien flavors, that’s what I’m not keen on in some pale rose.
In particular I like Sancerre Rosé, Côte de Provence Miraval and many more.

For more information on Berry Bros & Rudd Wines and their activities, visit their website on BBR.com