Yes, MMI one of the two beverage operators in Dubai celebrating 100 years presence in the market. Many people like myself were totally shocked by the news as we couldn’t believe alcohol was sold back then.

In truth, MMI, as we know it today, was not a beverage distributor but back then was known as Gray Mackenzie & Co who opened their first office in 1916 as a key strategic partner to HH Sheikh Rashid Bin Al Maktoum, in the maritime business. Their role was to help the commercial trading in Dubai ports, and was also appointed in 1970 to manage and operate Port Rashid.

Only in 1979, with the opening of Jebel Ali Port, Dubai government introduced the Liquor License System to control the sale of alcohol. In 1983 Gray Mackenzie & Co. changes its name to Maritime & Mercantile International LLC (MMI), following government legislation requiring that all trading companies’ business names accurately reflect their trade.

In 2000 MMI became a subsidiary of the prestigious Emirates Group. And in 2002 with Dubai expanding faster than almost any other city on earth, fuelled by the hospitality sector and its support services and industries, MMI fine-tuned its focus to purely its beverage business.

To commemorate this unique event, MMI hosted an absolutely stunning dinner at the Burj Al Arab, celebrating their anniversary, together with the Symington Family, who owns Port Houses such as Graham’s, Cockburn’s, Warre’s and Dow’s. At this beautiful dinner, one of the highlights of the night was a tasting of Graham’s Single Harvest Tawny Port 1916, an unforgettable experience. One of my tasting notes was Christmas in a Glass. 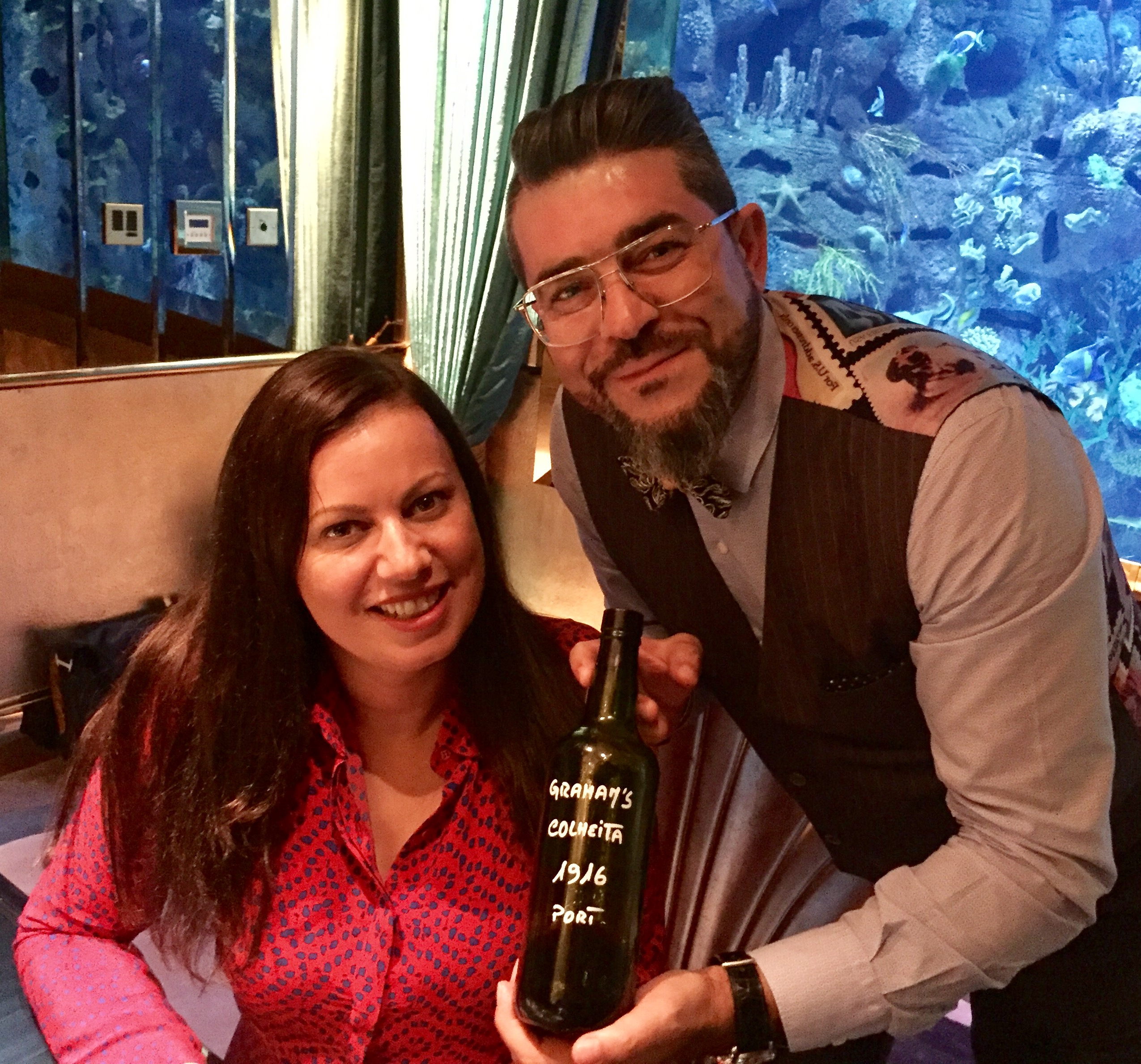 Other Ports tasted at the event were:

Undoubtedly this pairing of the two brands is naturally for their similarly long history in their related businesses. TastedAndRated interviewed Isabel Monteiro, Market Manager for the Symington Family, who explains more about their history and vision.

LUCA: What is the history behind the Symington Family?
ISABEL: The Symington family, with Scottish, English and Portuguese ancestry has been present in the Douro for five generations, since 1882, when Andrew James Symington, aged 19, sailed to Porto from his native Scotland to work for Graham’s.In 1887 Andrew James Symington became an independent Port shipper and then in 1905 AJS became a partner in Warre’s & Co. He became its sole owner in 1908.

In 1912 AJS became a shareholder in Dow’s and assumed responsibility for the operation in Portugal, including the Douro vineyards. His grandsons became Dow’s sole owners in the early 1960s. In 1970 the Symington family acquired the highly regarded Port producer, W & J Graham’s. Next, in 1989 The Symington family acquired Quinta do Vesúvio, one of Portugal’s legendary vineyards then in 2000 The first of the Symington family’s Douro DOC wines were launched: Altano and Chryseia (the latter in partnership with the Prats family of Bordeaux).
In 2006 Cockburn’s Douro Quintas, Vila Nova de Gaia Port lodges and all wine stocks were acquired. 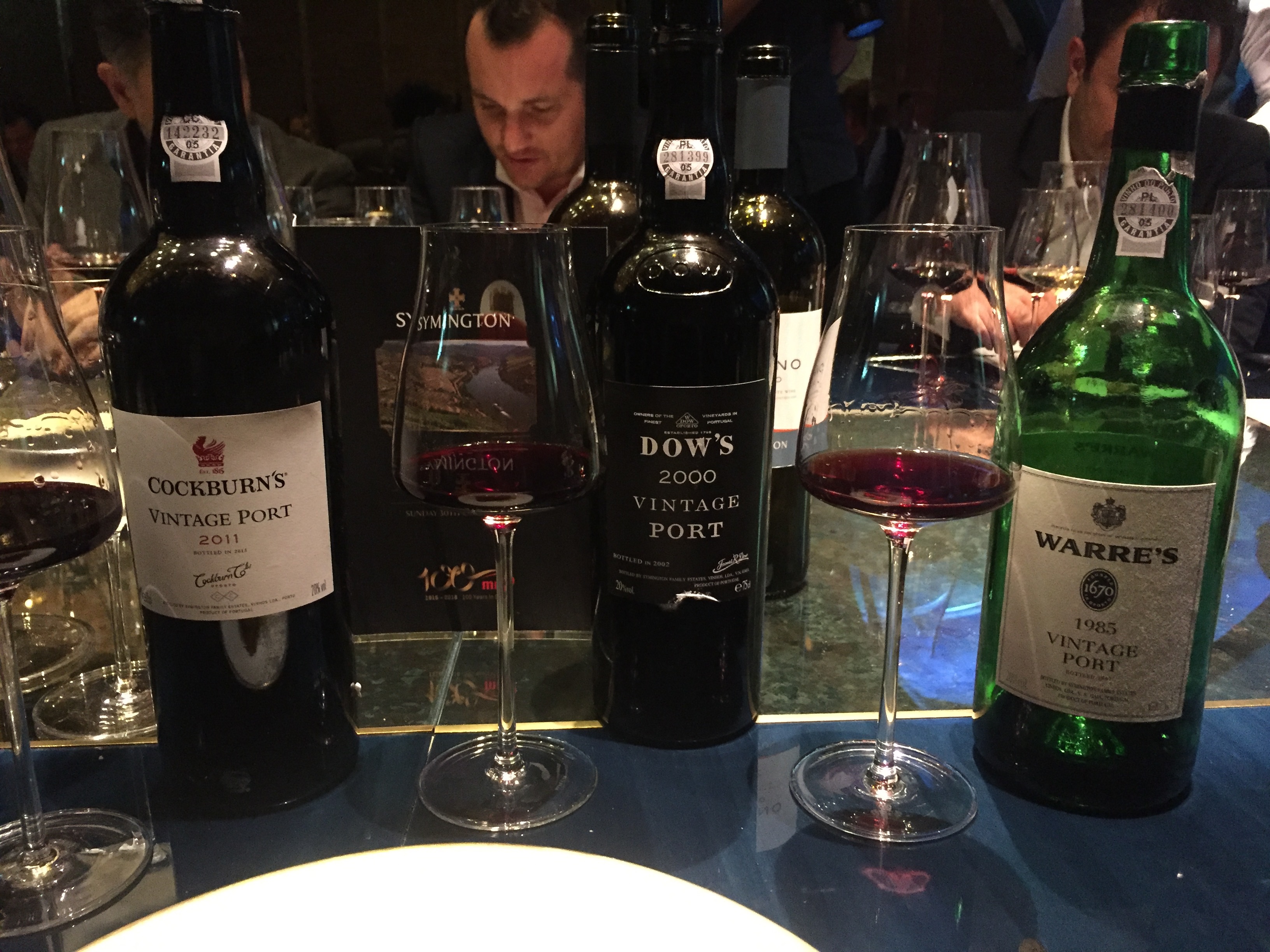 LUCA: What is the story behind Port Wines?
ISABEL: Duoro in Portugal is the oldest and most highly regulated wine region in the world. The trade of Portuguese wines in England intensified during the war of the latter with France, and the subsequent ban on all French wines in England in 1679.
The English had to find another wine region from where to import, and so they fell in love with the Portuguese wines as they were structured, tannic and alcoholic. Of course, the trip to England was longer than from France, so they needed to make sure that the wine would last till reaching the English port. They subsequently introduced the fortification process, whereby adding brandy to the wine. Only in the early 18th century, it became a practice to add the brandy before the fermentation was finished, and from there it became a more common process as the sweetness of the residual sugar and the aromatic fruit flavors were more appealing to the English consumer. Soon after that the English merchant asked the king to regulate the wine process in order to stop fraud, have better wines and continue with the trade.
Consequently, in 1756 the government created the Companhia Geral dos Vinhos do Alto Douro. This new institution was directed at ensuring the quality of the product, avoiding fraud, balancing production and trade, and stabilizing prices.
Today this company is called Douro and Port Wine Institute.

LUCA: What is the main regulation of the Institute for the production of Port?
ISABEL:  They firstly have an objective criteria of who can produce port in that year and depends on the classification of the vineyards, which are classified from A to F. It’s a system that grades the terroir and quality of the vineyards and is based upon its physical characteristic such as vine density, granite and schist content of the soil, exposure to the sun, altitudes and grape variety. In this way we are making sure that the producers are making the best quality grapes for the production of port. Secondly, all Port wines must be aged for a minimum of 2 years before release, and then they can only sell 30% of their production of that vintage. These laws legally encourage the Port producers to age their wines for extended periods of time and maintain the ideas of what they are famous for. 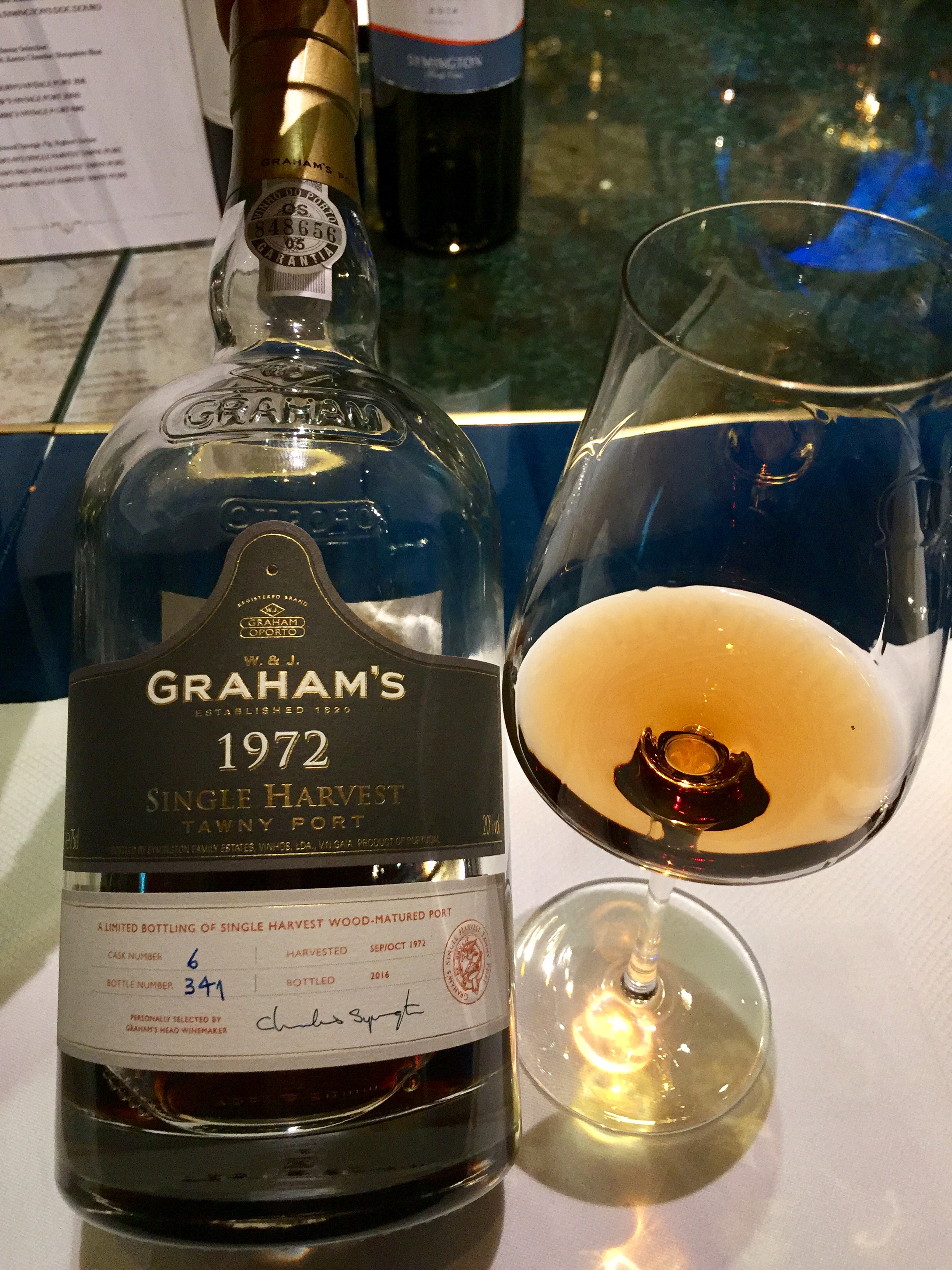 LUCA: How is Port wine  made?
ISABEL: Following the harvest, the grapes are de-stemmed and placed in shallow open stone vats called lagar, where the wine maker has two days to crush the grapes and intensify the extraction of the color and tannin from the skin.
From the lagar, the free run juice is then moved into the fermentation tank, where fermentation and sugar level are monitored. Once the sugar level reaches the desired level, the 77% neutral spirit is added to stop the fermentation till it reaches 17.5%ABV. 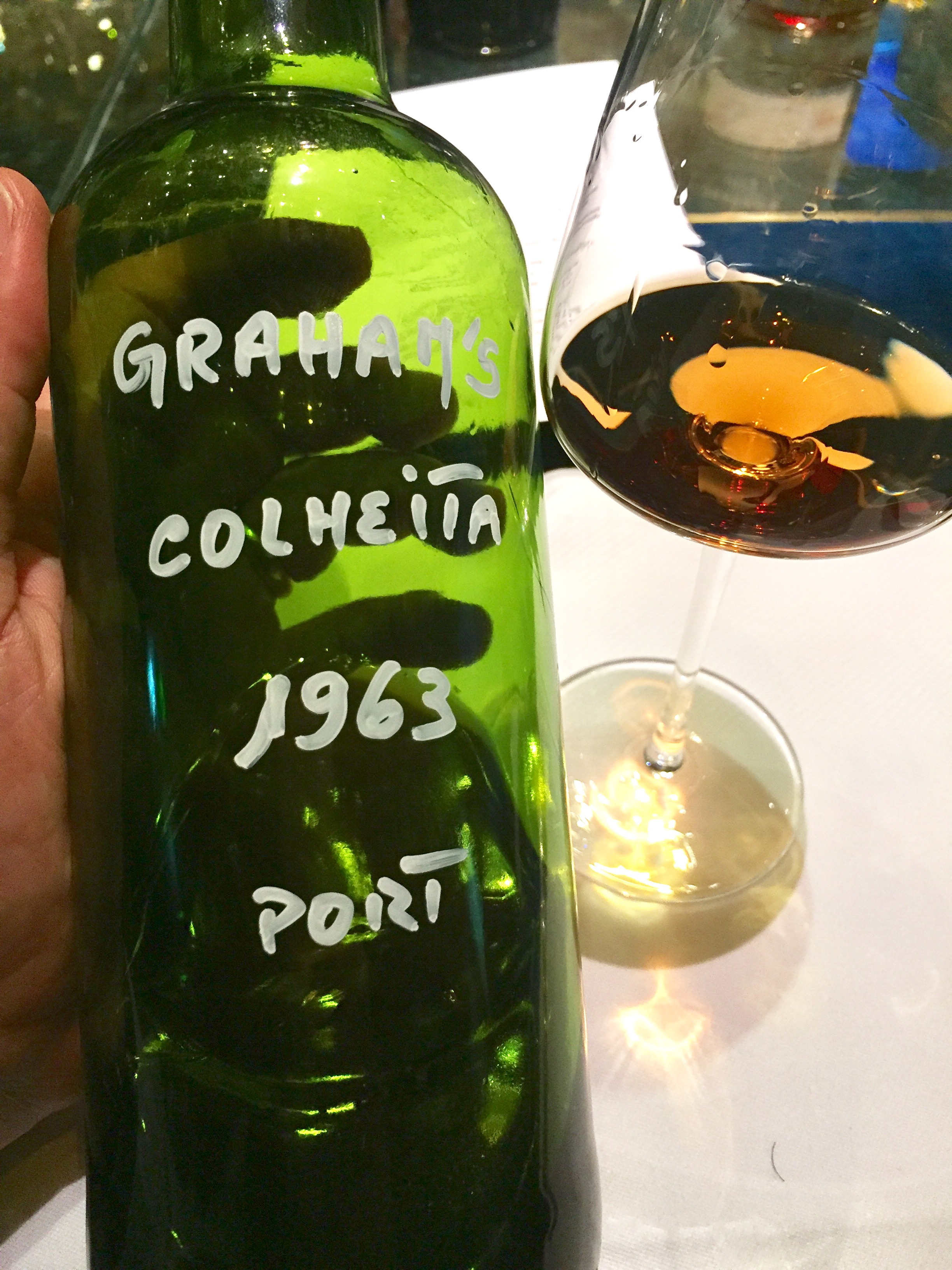 LUCA: What are the Port Classifications?
ISABEL: Vintage Port, is made only in exceptional years, mainly 3 times per decade, and is decided by the Duoro Institute. It’s aged in a barrel for 2-3 years and is bottled without filtering. Next the bottles are laid down for a long period of time to improve and develop flavors.
Tawny Port is a blend from the harvest of several different years, having been blending in the barrel between 3 and 40 years. This Port becomes a brown hue in color and develops raisin and nut flavors.
White Port is made from the white indigenous grape variety, and can be dry or sweet in style. It follows the same fortification process of the red Port. It is intended to be drunk as an aperitif.
Ruby Port is a blend of several vintages that have been aged in barrels for up to 3 years. Those Ports are bright red in color and are intended to be drunk as soon as they are bottled.
Late Bottle Vintage Ports are from a single vintage that is stated on the bottle and are aged in barrel for 4 to 6 years. The LBV are meant to be drunk soon after bottling. They can be either filtered or unfiltered and have a quite rich flavor.
Single Quinta Port is from a single vintage from a single Quinta or Estate.
Those Ports are good in quality but not good for Vintage Port. They are aged the same as the Vintage Port and meant to be drunk as soon as bottled, however, they can improve with bottle aging.
Colheita Port is a Tawny Port made from a single harvest that will be stated on the bottle. The Port is given extra aging in the barrel for a minimum of 7 years. Its color is faded and develops nutty flavors. 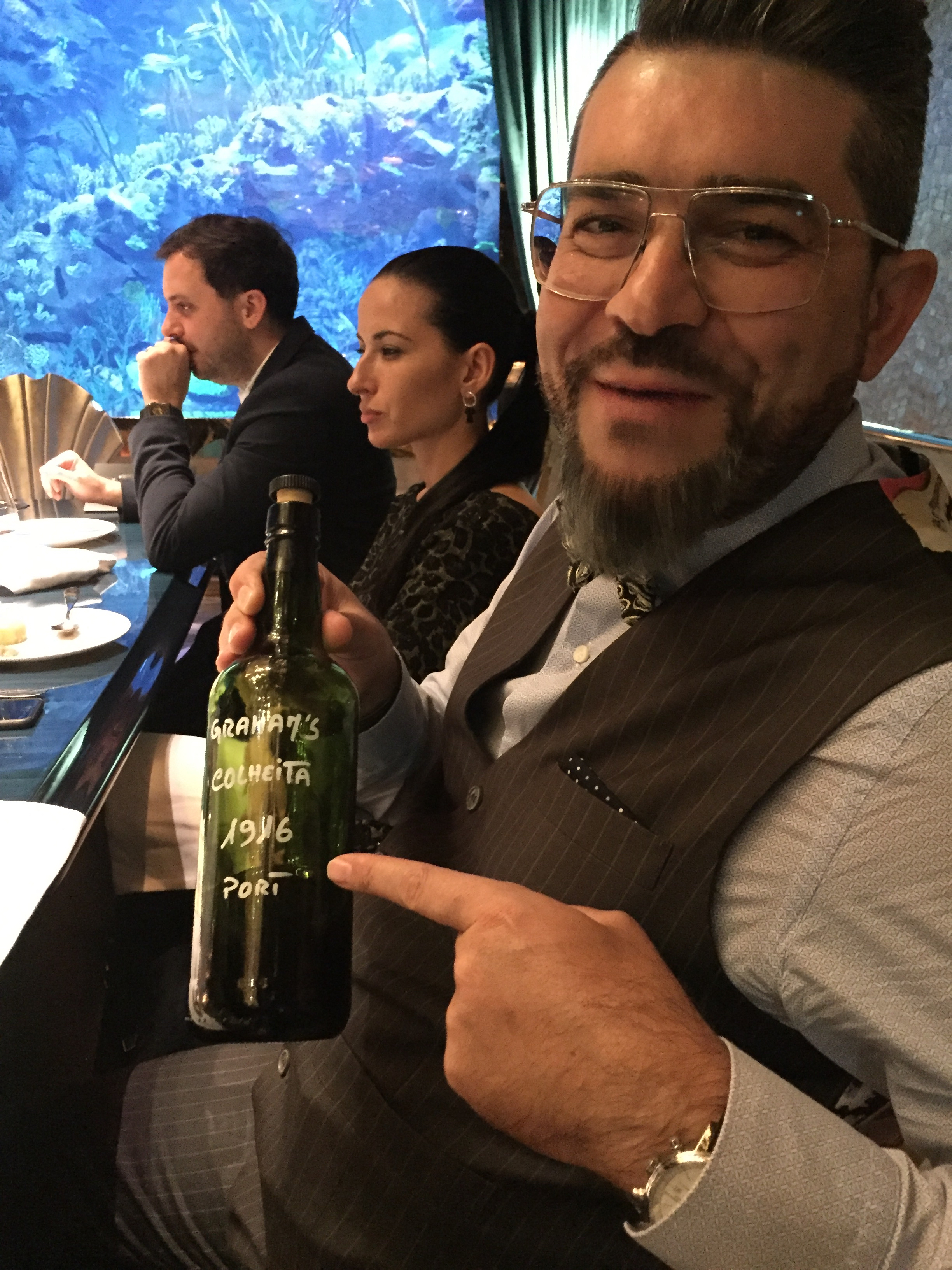 LUCA: Do you think that Brexit will affect your market?
ISABEL: Certainly the UK is the biggest market in terms of value, and already with the pound being very low it does affect our economy, however we are not concerned about the political situation of  Brexit. We know that our trade with the UK goes back to the 14th century and are sure it will continue fruitfully. We will work on a special agreement as we did in the past and before the European Market.