During the 8th edition of the Italian Cuisine World Summit 2016 that took place in Dubai between the 7th and the 17th of November, which coincided with the launch of TastedAndRated, I had the honour to be the Wine Director for the Summit. One of my roles was to help organize several wine activities such as this event at the Capital Club DIFC, where together with the courtesy of A&E, we showcased two wines from Friuli Venezia Giulia. During this showcase, we discussed their terrains, their story, their philosophy and most importantly tasting their latest products that are not yet in the market, much to the delight of the many sommeliers and professionals present.
The person presenting those two wineries was Laura Pedrazzoli, an enthusiastic and knowledgeable individual who represents both wineries. We met the day after the event to delve deeper into her amazing wine region and the uniqueness of the two wineries. 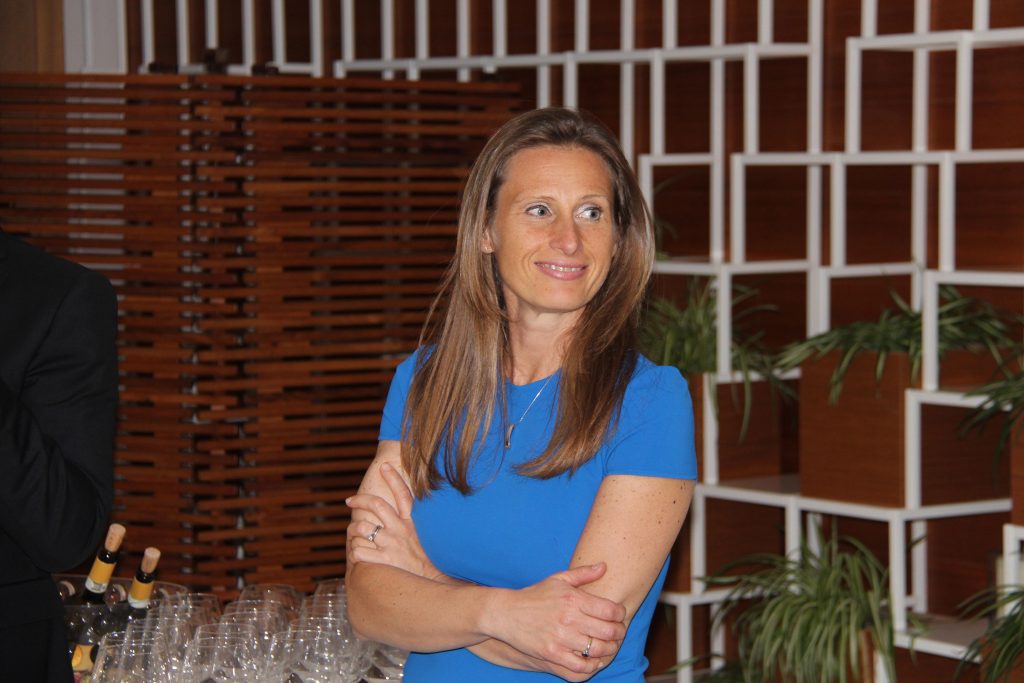 LUCA: Talk us through the Friuli-Venezia Giulia region
Laura: The FVG is a very small region in Italy, situated north-east and bordering with Austria to the north, Slovenia to the east and Veneto region to the west.
It’s a region that combines different people and cultures such as Italian, Slavic and Austrian. Geographically it is even more diverse as it includes the Julian Alps in the north, the hills bordering with Slovenia in the east, the Adriatic Sea in the south and the plain of the Grave del Friuli on the west.
Wine production goes back to the Roman time when Julius Caesar established his troupes here in Aquileia. Since then this area has become famous for its wines and for this reason when the Venetians were ruling the area, they showcased around the Mediterranean cities. Those wines soon became very famous and in the fourteenth-century, it became necessary to protect and regulate the best wines from the area.
In 1765 Maria Theresa of the House of Habsburg founded the Agrarian Society Teresian which, following studies of the territory, advised growers of the best viticulture practices and suggested which varieties to plant and where to ensure the best results. This amazing history and diversity of people and territory shaped what FVG wines have become today. Nowadays, there are 20,000 hectares, shared by 1500 producers, with 40 different types of grape variety planted, 11 DOC and 4 DOCG appellations.

LUCA: How do you communicate this diversity?
Laura: It’s very difficult, as from one side you have the wine lovers that have an enthusiasm for this diversity, but from the other side you need to approach the world without having a climate or a territory or a grape variety that can represent this region. That’s why the format of tastings like the one of last night at the Capital Club is very important for us. Yesterday we only talked about the DOC Collio Orientali that has only 2,300 hectares and features mostly quality wines.

LUCA: what about the climate of FVG?
Laura: It’s magical for vine growing, because from the top it looks like an amphitheater, which has two natural moderators of the climate. The first is the Julian Alps that in the north protect from the cold winds (called Bora), and the second is the proximity to the sea, providing warmer temperature in springtime and mild summer.  These two climates make sure there is a swing between the daytime and nighttime temperatures, and this improves the development of the flavors, acidity and structure of the wine. Those climates also help to grow aromatic and semi-aromatic international grape varieties such as Sauvignon Blanc and Pinot Grigio.

LUCA: Which ones are the grape varieties of FVG?
Laura: The grape varieties planted are 80% whites, both indigenous and international. In terms of indigenous white grape variety, with the exception of the Glera (which is the most planted in Friuli Venezia Giulia and Veneto, for the production of the Prosecco) the Friulano is definitely the flagship for the people of the region, which is a grape variety largely used as an aperitif with its thyme and apricot flavors and has a typical almond aftertaste.
The Ribolla Gialla is a grape that is slightly aromatic and fresh with high acidity and it lends itself to the sparkling wine making. For the indigenous red grape variety, the red fruit of the Refosco grapes are definitely favourable, while the Schioppettino is the noble grape, elegant, spiced with great aging capability. The Pignolo was nearly extinct at the beginning of last century as it is very difficult to grow. But today it has been saved and is now appreciated around the world as it reminds many wine lovers of the Nebbiolo due to his high tannins and acidity.
Of the international grape varieties, Pinot Grigio and Sauvignon Blanc are the most planted and loved by the majority of the export market, followed by the Chardonnay and Riesling, the latter of which creates a very fine and elegant wine as elegant is the Pinot Blanc and the dry aromatic style of the Malvasia Istriana.

LUCA: Why have you decided to represent those two Wineries?
Laura: They are both coming from the Colli Orientali area and both represent the territory of this area, yet they are two different realities. Bastianich represent the brand and Moschioni the small producer: 260,000 bottles vs 40,000 bottles. Joe and Lidia Bastianich are the owners of the homonym Estate.

Lidia Bastianich was born in Friuli but had her life and career in America with her Italian cuisine and cooking show.  Since they open their first restaurant in 1971 Lidia has always been an ambassador of FVG, and that’s the reason to invest here. They produce a wine that is modern, balanced, loved and with the Friuli backbone of the tradition. These traditions for Lidia, Joe and their winemaking team include indigenous grape varieties both as single grape or blended. Bastianich flagship blend wines are the Vespa Bianco, and Vespa Rosso.
The Vespa Bianco is a blend of Chardonnay, Sauvignon and a small percentage of the indigenous Picolit. Usually, the Picolit is a grape variety used for the production of sweet wine and Joe uses it in this blend because it adds a concentration. The Vespa Rosso is a blend of Merlot, Cabernet Sauvignon, Cabernet Franc and 30% of the indigenous grape Refosco.
Bastianich single varietal wines is called Plus, which is a Friulano, from a single vineyard of 60 year old vines. A small percentage of those grapes are dried before vinification to add concentration and aging capability. 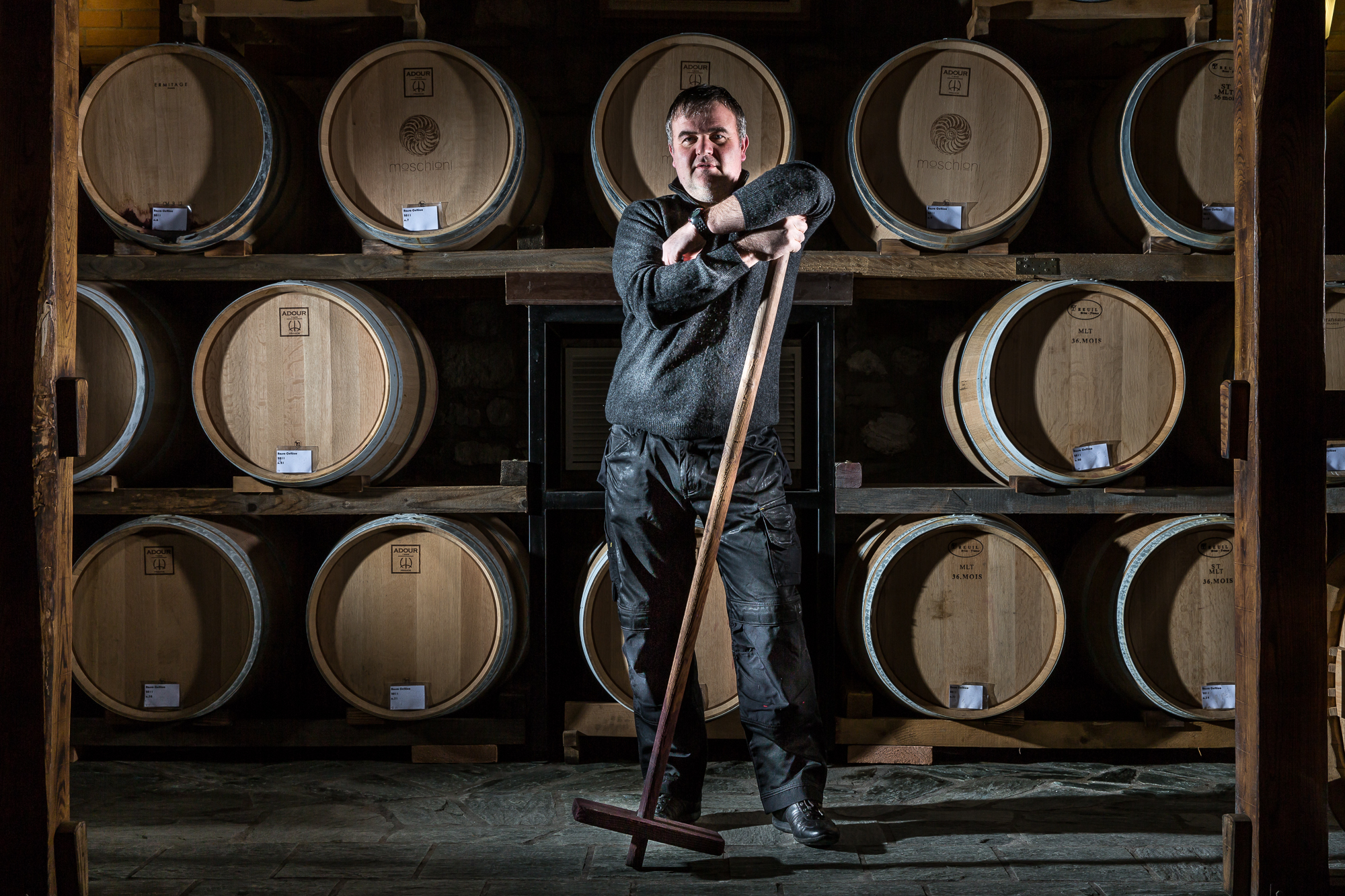 On the other side, Moschioni, geographically very near to Bastianich, is a very small family owned Estate that became known when the son Michele decided to take ownership and started to produce only red wines, and most from indigenous grape varieties. This was not an easy job because it was not easy to find historical red grape varieties such as Schioppettino, Pignolo and Tazzelenghe. The latter was incredibly difficult to grow and vinify due to the high tannins. To resolve this problem, Michele called on his friend Dal Forno who suggested a late harvest to have maximum maturation. In the cellar he started to use only natural yeast, without any sulfur, and he moved the wines from one vessel to another and laid the bottle in the cellar to mature for several years.
Michele is a maniacal worker, he only releases his Schioppettino and Pignolo in what he thinks are the best years otherwise he blends them and sells them off under the label of Biset at a very attractive price, and usually they sold immediately. His production is very tiny and his yields even lower as he produces 1 -1.2 kg for a plant which means that he produces one bottle of wine per plant. Other wines he produces are the Rosso Celtico, that is a blend of 50% Merlot and 50% Cabernet Sauvignon, and the Rosso Real that is a blend of 50% Tazzelenghe, 25% Merlot and 25% Cabernet Sauvignon.