We all know Dubai brings some of the best dining entertainment when it comes to food & beverage, however some are so outstanding that they mustn’t go unnoticed. Early last year, the Glenfiddich Team came up with the idea to launch a series of events called #GFExperiments alongside the launch of two new experimental whiskey products. The first experiment whiskey is the Glenfiddich IPA , the first ever single malt finished in Indian Pale Ale craft beer cask from a Speyside brewer, a brewer who, like Glenfiddich, shares a passion for innovative flavors. The second experiment is called Glenfiddich Project XX, a product of twenty casks from the distillery, hand-selected by Glenfiddich experts from 16 different countries. Then Glenfiddich malt master Brian Kinsman developed one unexpected and extraordinary whiskey by bringing together that twenty cask. 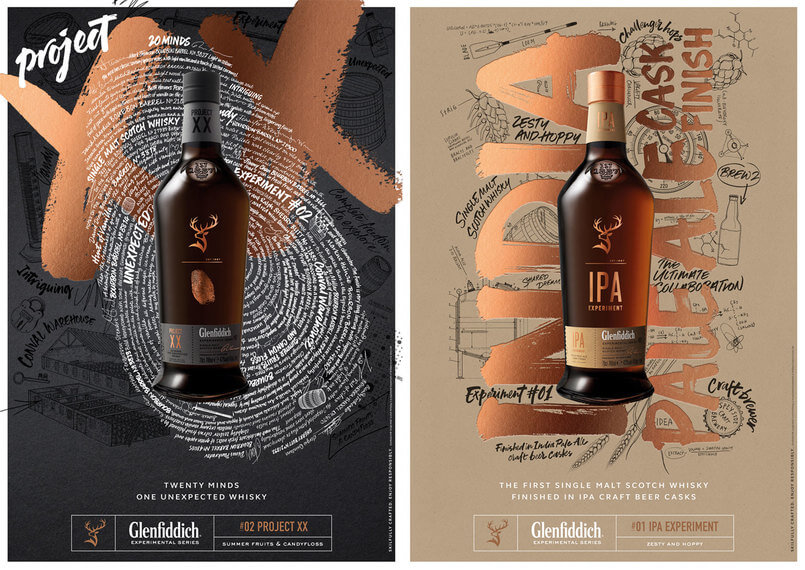 Those launches coincided with other experimental events and TastedAndRated participated in their 4th event, hosted at the Siddharta Lounge by Buddha Bar at the Grosvenor Hotel. This event was named #GFExperiments with ART and showcased 3 different artists at work while experiencing master classes, cocktail creations at a collection of stations and opportunity to experience the hometown of the distillery through virtual reality.

Previous events included the #GFExperiment Taste by Sound. Here, guests were dining in the dark at the Noir restaurant at the Fairmont SZR.
This experimental sensory experience has been designed to allow diners to enjoy each course with a different Glenfiddich. Each course was also accompanied by a musical composition specifically designed by Tse Tse Fly, for the #GFExperiments.

The first event was launched at the Westin Mina Sayahi on the 28th of September after a global hunt to find the world’s most experimental bartender. This global search aimed to recognize and reward maverick individuals who collaborate with artists outside of the traditional drinks world in order to create a more surprising and inventive drinking experience. At the Westin Mina Seyahi, the 5 deserving finalists showcasing their own interpretation of how to best enjoy a serve of Glenfiddich. Each bartender has collaborated with a master of another field, such as a musician, chef, designer or artist, to co-create a unique drinking experience inspired by Glenfiddich.

The winner of this competition was Emilio Valencia, senior bartender at the newly opened Aji Restaurant, a unique Peruvian restaurant located at Club Vista Mare on Palm Jumeirah. At TastedAndRated we’re passionate about focusing on emerging ,passionate people that help to shape the F&B scene of the Emirates, so sat down to get to know Emilio better.

LUCA: What’s your role with Glenfiddich’s Experimental Series
EMILIO: The experimental series gave way to “The world’s most experimental bartender” competition that is searching for exciting ways to promote not only the cocktail culture, but expand the amazing brand that is Glenfiddich. Last year was the first edition of it globally and I was the winner of it in Dubai, so now my role is to help push the competition and bring it to exciting new levels and with this, give my little contribution (like so many other awesome bartenders) to set Dubai up as a leading market globally

LG: Where did you start bartending?
EMILIO: I started working in hospitality when I moved to London at the age of 19. My first job was as a bartender straight away in a place called “Everything Must Go” which later was renamed “PUNK” in Soho. I was under an Australian Bar Manager called Zak who taught me pretty much everything from the basics and classic cocktails up. After there I moved to the iconic Ronnie Scott’s where my passion for cocktails began. After 8 years in London, I moved to LA to work in “El Carmen” Mexican cantina under the wing of Gilbert Marquez who works as the brand ambassador for Ilegal Mezcal in the US. Here in the UAE, I started in Asia De Cuba AD and then went to take over the bar at El Sur in Westin Mina Seyahi where I managed to showcase my skills and put my mark on the Dubai market.

LUCA: Since you have been in Dubai how do you see the local Market?
EMILIO: Healthy and growing, but there is still a long way to go if we want to compete with cities such London or New York.

LUCA: What does bartending means for you?
EMILIO: I have a very strong creative background. My dad was in the music business so I have always been surrounded by creativity and art. I play guitar (very badly) and have done since I was 12 years old. But for me bartending, being both a career and a passion is a way for me to get out of my head and be creative.
I love making music but as of now bartending is my main creative outlet and to me that is the best feeling in the world, especially working in a place like Ají with Laura Duca our head bartender and Jan Liska, our beverage manager where creativity is encouraged all the time.

LUCA: What your advice for anyone that wants to start bartending?
EMILIO: Strive for knowledge and take it as seriously as a profession but never take yourself too serious. At the end of the day bartending should be fun.

LUCA: Are we seeing the same product behind the bars between the markets that you worked for?
EMILIO: No, with all the rules, regulations and taxes, it’s difficult to bring some of the more obscure products such as Domaine de Canton or Ancho Reyes which both are cocktail making gold but impossible to find here.

LUCA: What’s the Dubai ‘trend’?
EMILIO: I think Dubai is still in the “the bigger and shinier the better” but finally it is shifting.

LUCA: What’s the new trend now?
EMILIO: Drinks wise I see the industry going back to old classics, where less is more when it comes to ingredients. As for the industry, I see a trend in sustainability where more and more places are trying to reduce their carbon footprint to a minimum. A perfect example is what Sigrid Sarv from Morah Dubai did for her World Class coffee challenge. Bartenders were asked to make a coffee drink and she used the used coffee grounds on her drink, beautiful to look at while minimizing wastage.

LUCA: What’s the next trend?
EMILIO: In Dubai? God knows, the industry, like the city, is changing with every day that goes by so what you might think is coming as a trend might change the next day. I think the big thing right know is sustainability and will be for a while.

LUCA: What’s your philosophy when you create a drink and a menu?
EMILIO: I tend to think a lot as a guest more than a bartender when it comes to the creation of drinks. Three things are my main focus:
Profile: Who do I want the drink to be drunk by? Is it for men, women or both
Flavor: I see the spirit flavor profile and I build the drink around it.
Looks: In the immortal words of a good friend of mine “Make it look sexy”.

LUCA: Are you judgmental when you go to another bar?
EMILIO: You can never take the hospitality out of your eyes so it’s something I fend myself doing accidentally. The first thing and most important thing is personality. There is nothing worse than being served by someone who looks miserable or pretends to be too smart. If you don’t know how to make awesome drinks but you are awesome yourself then you’ve made my night. Like my friend Sany Bácsi from Coya says: skills and knowledge can be taught, personality can’t.

LUCA: What do you drink when you’re off duty?
EMILIO: I usually drink beer and straight spirits. Whiskey, Tequila or Mezcal.
If I want a long drink I’ll have tequila with soda water (or grapefruit soda as a Paloma if available) and if I want a cocktail I usually go for a Tommy’s like the true Mexican I am.

LUCA: Are we missing any product in Dubai?
EMILIO: Yes, plenty.

LUCA: How are the bar standards here in Dubai?
EMILIO: Depends on where you go, but most top cocktail bars have super high standards, which is good for the industry as it keeps us pushing to get better as an industry.

LUCA: Any cocktail and food pairing?
EMILIO: Margaritas and Ceviches

LUCA: Tell me one recipe that represents you?
EMILIO: Mezcal, Campari, Raspberry Shrubs, Lime, grapefruit juice and Agave syrup. Worm Salt as a rim.It is sweet and sour, with the right amount of bitterness and smoke which is exactly what I am. 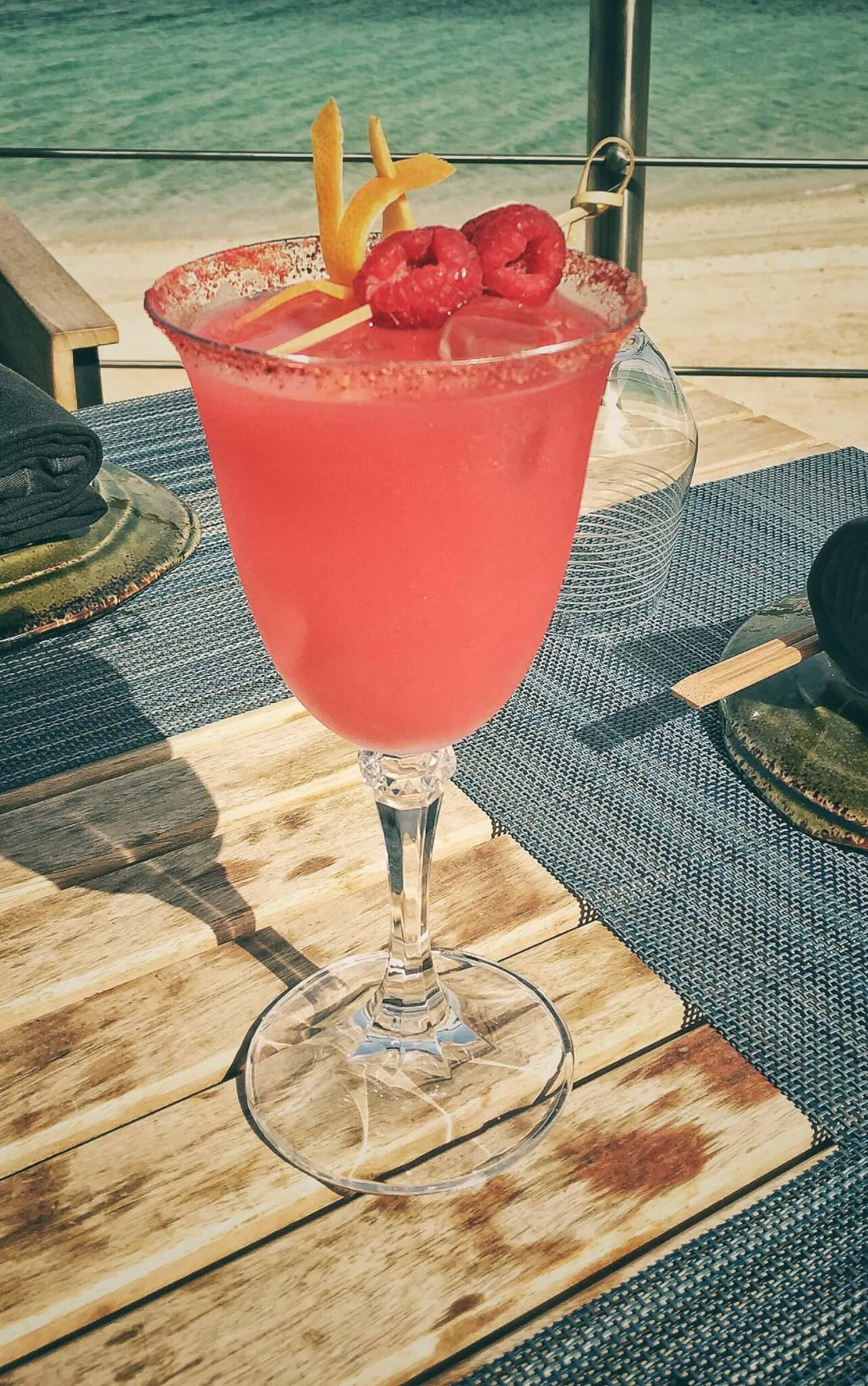